Singapore, a country under 50 years old that has become one of the richest in the world.  This article is all about what to see in Singapore and what to do in the “Lion City”.

If you travel through Southeast Asia you will find that most of the countries share several things: a lot of chaotic traffic, except in very tourist areas, you find garbage in the streets and although in the progressive development, the infrastructures are not very modern.

Well, Singapore is the exception. This country-city has opted for public transport, for leisure centers focused on tourists and for cleaning its streets (it is forbidden to eat chewing gum!). For us, who had been traveling in Asia for several months, it was a real shock to get here and we asked ourselves more than ever why Singapore is so different from its neighbors.

If you are bitten by the bug and want to know a bit of the history of this country like us, read on, if not, go directly to the itinerary that we propose for your stay in Singapore.

Small summary of the history of Singapore.

This country-city only consists of 700km, which is the size of Menorca. Like almost all countries in Asia, Singapore was colonized by Europeans in the 19th century, in this case the English.

In 1819, Thomas Stamford Raffles established a British port in this region that made Singapore a strategic point for trade between China and India.

After the Second World War and after several internal disputes, the English allowed the self-government of both Malaysia and Singapore, and they formed a coalition, the Malaya Federation.

However, the union of these brought many ethnic, economic and political conflicts and, only two years later, Singapore was expelled from the Malaya Federation.

As a result, Singapore became an independent republic in 1965, even if it was a poor country, without natural resources and where only two million people lived.

It was then that Lee Kuan Yew, the father of modern Singapore, promoted industrialization, facilitated foreign investment and bet on becoming the main port between Europe and China.

With these measures the capital began to arrive, the maritime routes were expanded and modern infrastructure was invested, giving rise to the world-visited Gardens by the Bay and Marina Bay.

Since then the country’s economy has grown exponentially, being the country that has grown fastest economically in all of history. But as always, everything is not the color of roses.

All this wealth created was not used to improve the welfare state of the population. It is known that at present the state of Singapore will spend around 7.5% of its Gross Domestic Product (GDP) according to its own annual accounts of 2018. In comparison, Spain allocated 41% of GDP in 2017 according to Eurostat.

Lee Kian Yew formed an authoritarian government where, according to several sources, the human rights of the population with corporal punishment have been violated as a fundamental part of the judicial system during his mandate. Censorship was also the order of the day and there was no political opposition.

Lee Kian Yew left office in 1990, although his political party, the Popular Action Party (PAP) continues to win the elections with overwhelming majorities. 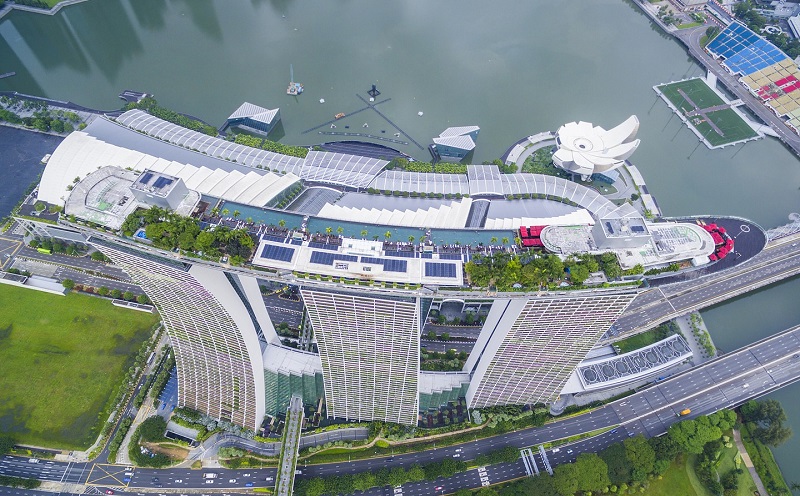 To begin, let’s talk about where to stay. In our opinion, the best area to stay is near Marina Bay.

As we have said before, Singapore is a tiny country and has a lot of space problems. That is why it is very common to find you in hostels “capsules” instead of rooms.

These “capsules” are beds provided with the essentials (bed light, locker …) separated by a curtain with, normally, another 10 “capsules” more.

These communal dormitories are the only accommodation option we have many (because Singapore is small and VERY expensive), and the truth is that we had a very good experience. If you want to take a look at the hostel we stayed we leave it here, good quality-price and very central!

For those who want to know what to see in Singapore with more budgets or celebrating a special occasion, Singapore hosts one of the most famous hotels worldwide, the five-star hotel Marina Bay Sands.

The night in a basic room is around $300 and you have access to the largest infinity pool in the country. Anyway, even if you do not stay here, there are ways to enjoy this amazing hotel, we tell you more about it!

Gardens by the bay

We put it first because of course, it was the best for us. These gardens were built in 2006 under the principle of making Singapore, “a city within a garden” and are the lung of this country. The complex consists of three areas: the central garden of the bay, the east and the south, the last being the largest of them all.

Leaving aside the wonderful views offered by the three areas, the area that offers more leisure is the south. In it are the Cloud Forest and Flower Dome, two greenhouses with many botanical species and even waterfalls. In addition, these complexes are littered with information panels in order to raise awareness about global warming, responsible water consumption and pollution of the oceans.

But in case you’re not surprised yet, and still wondering what to see in Singapore. The OCBC Skyway. This area invites you to walk among majestic concrete structures about 50m high in the form of a tree.

Apart from their size, these structures are unique in the world because they house thousands of vines and flowers planted inside. You could say that they are a kind of vertical gardens illuminated at night. And to top off the charm of this place, every sunset they do a free show that combines lights and music. It is already the last thing you need to feel an avatar in Pandora.

Apart from being a hotel, in this large building, you can find all the clothing brands you can imagine (expensive brands, of course). We are not very shopping but to enter and give you a break from the suffocating Asian heat with the air conditioning there is worth it.

Another thing that we recommend what to see in Singapore is if you are already there is to go up to the hotel restaurant to have a drink. For the poor like us, it is the only way to see the famous pool and the views that everyone talks about.

With regard to how to do this, we have heard several experiences: they do not let you climb if you are not staying at the hotel, they make you pay for a card which allows you to go up to the top floor. We both go up and down trying to find the way to climb we became a friend who was staying at the hotel. The truth is that he behaved and came up with us (and his card) to the top floor. And so we planted ourselves on the roof with all the rich.

Once you’re there, they do not ask for a room number or anything, only that they are seen with a closed shoe and without straps. We only treated ourselves to having a beer in the restaurant (which was already expensive caprice), but it was worth it since the views of the gardens and the skyscrapers of the city from there are priceless.

Haji Lane is another destination for them who still do not know what to see in Singapore Located in the heart of the Arab quarter, this avenue is a tourist attraction for lovers of street art and hipster fashion. The shops that you find here are original and bohemian and you can find everything from clothes to coffee shops where they can put a picture you make with them in the foam of your coffee. And for those who are more interested in cultural things, a few meters from this street there is a wonderful mosque that can be visited.

But really what really captivates of this place is the urban art that you find in each corner. Especially at night, with the lights and the good atmosphere that is generated, is undoubtedly one of the best places to have a few beers and meet people.

Singapore is home to many cultures and this is reflected in the different neighborhoods distributed by the center. One of them is this, the Indian neighborhood. Walking through its streets transport you to any corner of India, with its people, shops, restaurants that flood the atmosphere with that smell of spices and, of course, it’s Hindu temples.

If you still are on searching for what to see in Singapore, these Hindu temples can meet your need. One of these temples is the picturesque Sri Veeramakaliamman, which built in 1881 is the most important temple in the area. But for us, the best thing about this neighborhood was not the architecture, but the food. You can enjoy from buffets and bars of Indian-local food to restaurants of more category. There are options for all budgets and all preserving the Indian flavor and culture.

A symbol of Singapore, the Merlion statue has been an icon since 1964, consisting of a mythological creature with a lion’s head and a fish body. This lion spits water from its jaws constantly and represents protection over the bay. For its part, the body of fish, symbolizes the population of Singapore, which historically has been a fishing village.

This sculpture is the goal of all tourists who come to this city-state, in addition to the beautiful promenade that surrounds it.

Singapore is for us one of the best countries for street food. Its gastronomy is very varied and above all, very tasty. As we have said before, Singapore is quite expensive if you compare it with the rest of the Asian countries, but there are ways to eat delicious and cheap … and that’s thanks to street food.

If you wondering what to see in Singapore to enjoy street food, you will see there are quite a few Street Markets or Hawkers around the center. Here we tried for the first time the duriam (the famous stinky fruit), the stripe (typical dish of Singapore and that we hurt a lot in the heart try …) and the ice cream so original of this country.

Another curious thing to try in this market, or in the different street stalls that you find on the street, is the ice cream sandwich. And yes, it’s what it looks like: an ice cream wrapped in bimbo bread. In Singapore, it is very hot and ice cream does not drip everywhere. Something original that we had not seen in other places.

Tags
Haji Lane Marina Bay What to see in Singapore